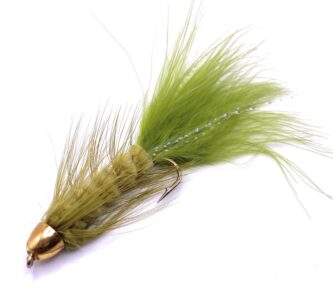 Conehead flies are probably the best prospecting fly pattern ever. The classic woolly bugger aka wooly bugger is tied with a cone head to get the fly down quickly in faster, deeper water and adds a bit of jiggling.  Our brand uses chemically sharpened, High Carbon Steel Hook and tied with premium materials making it an ultimate streamer.

Due to its resemblance to so many edible creatures in the water such as nymphs, leeches, salamanders, or even small sculpins, the conehead woolly bugger is so effective. Its tail undulating behind a fiber, bubble-filled body is just too much for most fish to resist. It just looks like a meal! Hard to beat a cone head Woolly bugger.

There are no reviews yet.

Be the first to review “Conehead Woolly Bugger” Cancel reply