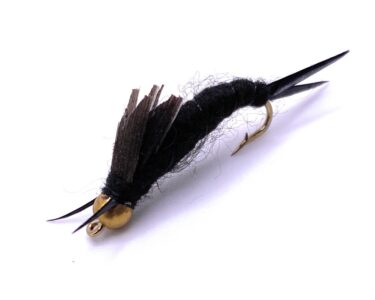 The Beadhead Kaufmann stone fly nymph is the Bead Head version of the fly that was developed by Randall Kaufmann and has become a standard in Stonefly Nymph Patterns . It is a lifelike and super heavy Stonefly Nymph Pattern.  The fly comes in a number of colors but the Black, Brown and Golden variations are the most popular and represent most of the natural stoneflies found in Western Rivers. The fly is designed to be fished near the bottom, tumbling among the rocks and boulders in deep pools and faster moving water year round.

Stonefly nymphs live in clean moving water, and are an important feeding source for both trout and steelhead. A good indicator of steelhead holding areas will be the density of stonefly nymphs in the area.

It is a must have for any trip in the West. Be sure to have some in your fly box!

Usually available in the following colors Black, Brown and Golden.

We also do carry a none beaded version of this fly which you can find here.

There are no reviews yet.

Be the first to review “Beadhead Kaufmann Stone” Cancel reply